What exactly is a PRP Treatment and how it can effectively treat hair loss!

If your looking for a non-surgical way to gain control of your hair loss then PRP is your answer!  Platelet-Rich Plasma (PRP) contains essential proteins that stimulate natural hair growth for the inactive or newly planted hair follicles into a active growth phase, also the growth factors assist in healing and tissue regeneration.
Here at the Paragon Plastic Surgery and Medspa, Dr. Mark A.Bishara provides a wonderful experience with our relaxing spa rooms where we perform a series of PRP Treatments. When starting your treatments, we began by drawling your blood for the centrifuge where it spins to separated the PRP from the blood. You will receive a ring block on the scalp to have minimal pain experience. The palette rich plasma is then injected back into the area of hair thinning. To get optimal results schedule your treatments 3-4 weeks apart!
Dr. Mark A. Bishara PRP Treatments are fast and convince with little to no downtime!
The Paragon Plastic Surgery avoids the common incorrect methods of administering PRP such as injecting too deep, not having a ring block provided for pain management, and the use of microneedling where you experience social down time, discomfort and only have temporary improvement.
Get started today to gain control of your hair loss by booking your consultation with Dr. Mark A. Bishara, where he will provide an indepth plan for your hair needs!
TO LEARN MORE ABOUT OUR PRP TREATMENTS, PLEASE CONTACT US (817) 473-2120 OR EMAIL [email protected] TO SCHEDULE AN  APPOINTMENT. 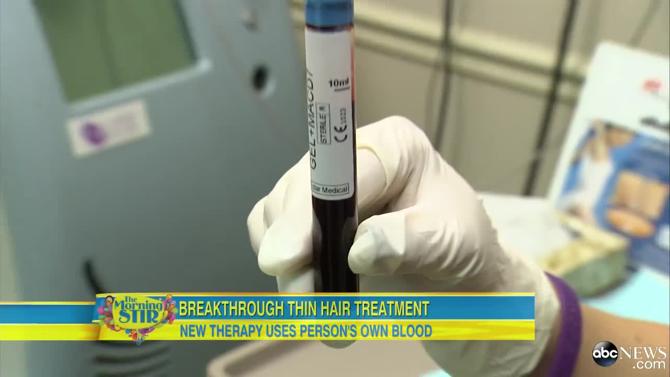 A new hair-loss treatment is giving hope to millions of people with thinning hair.
The treatment, called Platelet Rich Plasma therapy — or PRP — could help regrow and thicken hair without surgery, drugs or expensive treatments.
PRP relies on the patient’s own platelets. The patient’s blood is drawn and placed in a machine, where the plasma is separated from the blood and injected directly into that patient’s scalp.
The platelets contain growth factors that stimulate the regrowth and thickening of hair follicles.
Eyebrow Transplants Enhance Fullness in Thinning Brows
“This is the best kept secret in the world,” Dr. Jeffrey Rapaport, a New Jersey dermatologist, told ABC News.
Tanisha Jimenez has used PRP and she says it has worked for her.
Jimenez said that years of pulling her hair back caused her to lose some around her face. Just weeks after her first treatment, her hair started to regrow, she said.
“It’s amazing,” she said.
Rapaport noted, though, that this isn’t considered a cure for baldness.
“It’s a treatment … What we’re doing is increasing the diameter of the size of the hair follicle,” he said. “And we’re keeping the hairs that would stop growing in the growing phase.”
The best candidate for PRP is someone who has recently started losing hair, Rapaport said. It won’t work for those who are completely bald, and it won’t regrow all the lost hair, he said.
The entire process, including the injection, takes about 90 minutes.
Rapaport recommends one treatment per month for the first four months and then two maintenance treatments per year. Some doctors add other hair-growth medications to the mix

Although platelet-rich plasma (PRP) has been used for many years in other medical specialties, including orthopedics,  it has only recently become one of the latest techniques with hair restoration.  PRP is used for all Hair Restoration/Hair Loss patients, including patients who have Robotic Hair Transplants. PRP is an exciting non-surgical therapeutic treatment for patients who require stimulation of hair growth for hair loss conditions. The use of PRP for the treatment of alopecia areata and androgenetic alopecia (hereditary male or female hair loss) is available from Dr. Mark Bishara’s office.
While PRP is in the early stages of scientific research in hair restoration, PRP is not meant to replace current FDA approved therapies such as DHT blockers and Minoxidil. but it is a promising non-surgical therapeutic option for those patients with hair loss.
What is PRP – Platelet Rich Plasma?
PRP Platelet Rich Plasma is the use of a person’s own blood platelets to enhance hair growth as a stand-alone treatment or to improve the recovery and results of hair transplant surgery. In the field of cell therapy and tissue regeneration, research is continuing to progress regarding the use of PRP’s ability to stimulate stem cells, improve wound healing, and rejuvenate skin and hair follicles. PRP is done in 3 month intervals
Growth Factors
The human growth hormone (hGH), insulin-like growth factor-1 (IGF-1), insulin-like growth factor binding protein-3 (IGFBP-3), basic fibroblast growth factor (bFGF or FGF-2), vascular endothelial growth factor (VEGF), and platelet-derived growth factor-BB (PDGF-BB)- levels are significantly elevated after PRP injection, supporting a possible ergogenic effect of PRP.
What is LLLT (Low Level Laser Therapy)
The LaserCap® using Low Level Laser Technology (LLLT) can help men and women of all ages who suffer from hair loss by emitting pulses of laser light energy to the scalp to stimulate the hair follicles and improve blood circulation in the area, encouraging hair growth once again. Men and women being treated for hair loss sit comfortably under the lasers as it gently delivers the phototherapy to the scalp. Most of our patients read a magazine during treatments. There is no pain or discomfort from the therapy–some patients do report some “scalp-tingling.”  The laser cap is much more successful and effective in hair restoration then hand held devices that are available on the market.   The usual treatments occur 2-3 times per week.  The laser cap is available to have treatments done in our office, or can be purchased and take home with you.
For more information on PRP, LLLT and other hair restoration treatments, please call our office at (817) 473-2120.  Please come in and get evaluated with an endocrine testing panel, that tests your thyroid, testosterone, iron, and serotonin levels, to name a few. We also refer out for scalp biopsies for female patients, to determine the causes of hair loss.
You can also visit us as www.MarkBisharaMD.com and our Facebook page at The Paragon Plastic Surgery and Medspa